In 2016, the Heinz Trox Foundation will provide funding of EUR 176,000 for social charitable purposes and EUR 410,000 for scientific purposes.

Ten scholarships are awarded to ambitious students at each of the following institutions under the Deutschlandstipendium (German scholarship) programme:

The Deutschlandstipendium programme comprises a monthly grant of €300 per scholar, which is split equally by the German Federal Ministry of Education and Research, and the Heinz Trox Foundation.

We are also funding Mark Leske, the rower from Moers, with an additional scholarship while he studies mechanical engineering at the Technical University of Dortmund.

He trains at the Dortmund Olympic training centre in the U23 category and, in 2015, he and his team won the bronze medal in the coxed four at the world championships.

In 2016, he was called up for the U23 eight which will compete for Germany in the U23 world championships at the end of August 2016 in Rotterdam.

Mark Leske: “My long-term goal is to compete in the 2020 Olympic Games in Tokyo. The Olympics are the biggest sporting event for any athlete who participates in a competitive sport. This goal serves as daily motivation during training and reminds me to reach for my limit.” In 2014, the “Limitless” project was launched for the town of Isselburg. The project is supported by the community and the German Red Cross youth association in Borken. The Heinz Trox Foundation provides the project with funding of EUR 10,000 per year.

The project serves to care for young people who are testing their limits and are affected by a lack of perspective and orientation. The conventional services offered by local youth centres cannot help them.

A street worker regularly seeks out the young people at their meeting places and has been able to build up a foundation of trust.

The street worker is able to have a positive influence on the living and recreational situations of the young people and can gradually integrate them back into a social environment.

September 2016 saw the 'Early Birds' project being kicked off at Anholt primary school.

The morning childcare programme for pupils who arrive at the school very early had been jointly developed by the school's governing body, its fundraising association and the Heinz Trox Foundation.

16 to 20 children are regularly participating in the programme because their school bus arrives early or their parents have to go to work.

Breakfast is provided, too, since many primary school children do not eat breakfast before leaving home. Shopping centres are responsible for a significant proportion of inner-city power consumption worldwide and are thus particularly suitable for research into energy efficiency in non-residential areas.

The Heinz Trox Foundation has granted funds amounting to EUR 100,000 to a joint research project with the university Leibniz Universität Hannover and RWTH Aachen University which is aiming to develop new concepts for the reduction of power consumption in shopping centres.

ADVANCEMENT OF SCIENCE THROUGH THE HEINZ TROX WISSENSCHAFTS gGMBH

These are the words used by Heinz Trox to describe the purpose of his life and work.

He shaped his foundation in such a way as to promote research projects and junior researchers who focus on improving the well-being of people in buildings.

And this is why, in May 2016, the Foundation Council decided to create a comprehensive modular programme for the advancement of science, and that this programme should be organised as a GmbH, or charitable limited company.

On 24 August 2016 the charitable 'Heinz Trox Wissenschafts gGmbH' started its operations in close cooperation with the RWTH Aachen university. 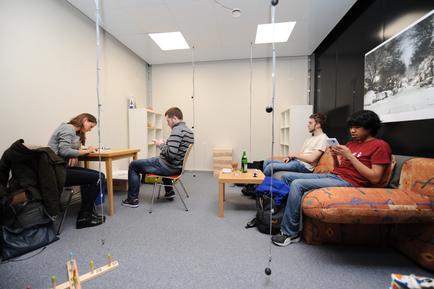