Heinz Trox was born on 29 June 1934 in Essen, Germany as the second son of Heinrich and Fine Trox.

He studied mechanical engineering and business management from 1954 to 1958 in Munich and in the USA. He began his career there, working for a leading American company in the air conditioning and ventilation sector. At his father's request, he returned to Germany in 1959 to join the family business with his brother, Klaus. Heinz Trox took over the management and development of international business. Soon after joining the business, he founded the first subsidiary companies in other European countries.

Heinz Trox and his brother took over the management of the business after their father passed away in 1970. In the same year, Heinz Trox began to accelerate expansion outside of Europe.

Following the death of his brother in 1988, the responsibility for the business fell on his shoulders alone, and he remained at the helm as the company rose rapidly to become a global player.

In 2001 he moved to the Supervisory Board where he continued to play an active role in shaping the future of his company. In 2006 he acquired the shares owned by his brother's family and became the sole owner of TROX GmbH.

Heinz Trox possessed a keen understanding of technical concepts and insisted on the highest quality. His desire for innovation and his creativity were paired with a good feel for what was feasible and an innate aptitude for numeracy. He worked with visionary ideas to ensure the continuous development of TROX and its product range. 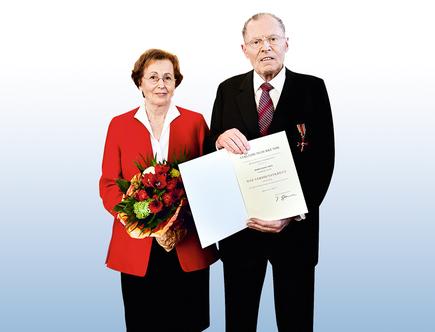 In 2014 Heinz Trox was honoured with the Order of Merit of the Federal Republic of Germany for his outstanding commitment to society. (Heinz Trox with his wife Brigitta)

His motto was: “The human being is the yardstick and his well-being is our goal.”

Privately, Heinz Trox had a quiet, modest lifestyle. The people around him always found him friendly and approachable. His willingness to help whenever he saw someone in need remains legendary.

By establishing the Foundation, Heinz Trox paved the way for the continued existence of his company group and ensured that the revenues served the common good.

Heinz Trox was honoured with many distinctions.

In 2014, he was awarded the Cross of the Order of Merit of the Federal Republic of Germany for his life's work.